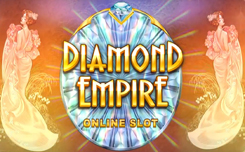 The Diamond Empire was developed by Microgaming in cooperation with partners of Triple Edge Studios.

Visually, the slot machine Diamond Empire resembles a board game on the board of which is a field of characters with images of cherries, BAR and sevens. With their help, participants will form pay lines on the right or left side of the screen. In addition to the basic denominations in the collection is a universal substitute and bonus activator Fortune Wheel.

As an additional function, the wild symbols of the Diamond Empire gaming machine produce multiplication if they stop on the winning line schedule. The coefficient of the multiplier can be different and depends on the number of participating titles:

Bonus mode of the slot machine Diamond Empire is launched by a set of 3 activators. Here, users can make one rotation of the wheel of fortune, which will bring a multiple value of the initial amount of monetary units, up to the maximum x888.