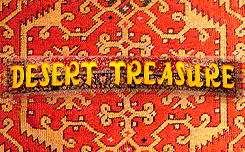 Company SoftSwiss, released a game called Desert Treasure. The theme of the game is built on how to best convey the mood of the desert. So, for this, golden warm colors are used in the design in order to depict sand as best as possible.

The Desert Treasure slot is equipped with 5 reels and has 9 paylines. The game has a basic mode, bonus game and risk play. In the game there are Arab, oasis, scarab beetles, scorpions, camels and, of course, the same compass, so that no one is lost among the boundless sand dunes!

Scatter symbol, which is represented by images of a girl, multiplies the current amount by 500 times. The girl, the compass and the cobra replace any symbols. Three or more scatterers give ten free spins of drums.

When three to five compasses appear on the screen, you are transferred to a bonus game in which you can not lose. Winning here multiplies the bet by 3 times. You have to choose the chests and jugs offered by the Arab, in which valuable prizes are hidden in the form of additional winnings.

Also in the game there is a so-called “progressive jackpot”, during which you will need to guess 5 digits. The game is reminiscent of the lotto known to everyone. When guessing not five, but fewer digits, bonuses will also be, but not so large.