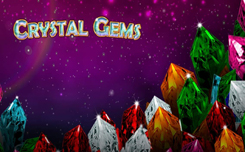 In the role of game symbols are various precious stones, as well as letters and numbers. Wild and Bonus symbols have special capabilities.

Wild, forms combinations according to general rules, and, if necessary, replaces other pictures.

Bonus are used to run free spins. Three, four or five such pictures, dropped out on the drums, give start to eight, ten or twelve free-backs. Payments in this round are calculated with additional coefficients x2, x3 and x4.

In any of the spins, the player can take part in a small bonus round in which you need to select one of the crystals to find out the win amount.

The video slot Crystal Gems does not have the characteristics, due to which it could stand out against the background of many other similar games. It is devoted to a rather hackneyed topic. The graphics are bright, but not at all excellent. On the other hand, it is a qualitative model with many advantages.