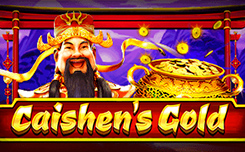 The developer of games for the casino Pragmatic Play announced the release of a new slot machine on the theme of ancient Asian culture – Caishen’s Gold.

The video slot has a format 3х5. Instead of traditional lines for betting – 243 ways of forming winning combinations. All the gameplay is accompanied by a thematic soundtrack and colorful animation.

The drums are depicted symbols of the attributes of ancient Asia, led by the key character of the game Caishen, which is able to bring the maximum payoffs on successful chains.

Thus, from the initial rate the gambler will be able to receive up to 1000-fold payment. In the slot there are games with a fixed jackpot.