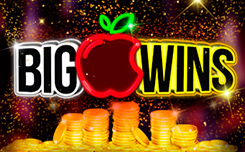 Developer Booming Games has announced a new slot called Big Apple Wins. Great and stable payments, fascinating plot and unusual graphics in the subject of New York – it’s all waiting for fans of gambling in the presented novelty.

The game features five rotating drums and uses 20 fixed paylines. The symbols in the game are everything that reminds of the theme of New York: the Statue of Liberty, pizza, yellow taxis, and bright sevens. The Statue of Liberty is a wild symbol. Empire State Building is a Scatter.

If the winning combination falls on the reels, the Gamble option will be activated. The Gamble function launches a bonus game in which you have to choose one of two characters: Big Apple on the left or Pizza Slice on the right. If the choice is correct, the winnings are doubled.

The gameplay will not leave indifferent any players. Pleasant graphics combined with bonus features makes the slot even more attractive.