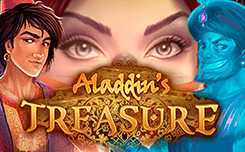 Company Pragmatic Play also decided to please its players with a quality slot on the theme of the cartoon about the adventures of Aladdin.

The heroes of the plot of the slot were characters familiar to fans of Arab fairy tales. The game takes place in the market where Aladdin traded. The graphic design of the slot is endowed with an animation effect, which makes the gameplay the most exciting, high-quality.

The main game action in the machine is the formation of combinations due to a variety of symbols. Here only the player should know that each symbol not only has its own pay coefficients, but also can have a very useful function for it. For example, in the machine there is a wild, pictured in the form of a sword, which will replace an inappropriate character in the line. This will form a more advantageous combination.

The second special character is a scatter in the form of a chest, which launches free spins. So, three scatter symbols guarantee the participant 15 rotations, four scatter will bring him 30 spins, well, in five he will get 50 free spins.

Running the bonus game is due to three or more symbols, which depicts the golden keys. The bonus opens in an additional game window and offers the participant a thematic round. The player’s task is to point to objects belonging to Aladdin and win certain prizes for them.